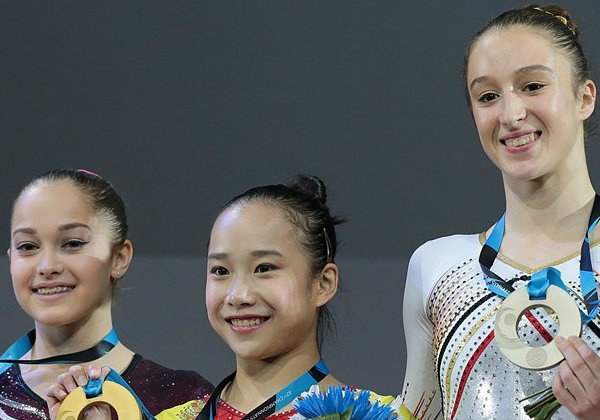 The Vault and Uneven Bar Finals are now complete, as is a day with comparably little drama when you consider the week. Two women defended their world titles on their respective events, Russia’s Maria Paseka on vault and China’s Fan Yilin on bars; first-year seniors gave world-class performances to nab silver medals, USA’s Jade Carey on vault and Russia’s Yelena Yeromina on bars; history was made as Belgium’s Nina Derwael claimed a bronze medal on bars; and a veteran, Switzerland’s Giulia Steingruber, claimed the bronze on vault. All in all, it was a relatively clean meet with the exception of two missed vaults (Canada’s Shallon Olsen on her Amanar and Japan’s Sae Miyawaka on her DTY ) and a visibly disappointing bars routine for USA’s Ashton Locklear, who had trouble on her toe-on full and then came off as she transitioned from her toe-on into jaegar. She looked to be in some discomfort, leaving one to wonder whether the bigger culprit was pressure or a nagging shoulder.

On vault, Maria Paseka beat the odds again, proving that you can be # 1 with a bad back so long as you can  throw a Cheng and make up for the shock with a great Amanar. (Jokes about form on her Cheng aside, I do worry about her safety, and wonder whether more severe deductions are in order.)

Coming in second and third on vault, USA’s Jade Carey and Switzerland’s Giulia Steingruber gave a different show, executing vaults they could do safely and much mostly securely. Carey performed a dymanic Amanar that carried a bit too much steam (bounding steps forward at the end)– and a much more controlled Tsukuhara double. And Steingruber performed a Rudi and DTY that were not her best (chest low on both landings and a step out of bounds on the first) but commendable.

On bars, Fan Yilin barely edged out Yelena Yeromina for the title, a result that will generate some debate in the days to come. She counted more visible errors–an almost missed inbar-half and a bit of a wild landing–but her Geinger was impressive, as was the combination leading into it–an inbar full to Komova II to Pak to Maloney. In the end, her D score was 6.5 compared to Yeromina’s 6.3, a difference that counted. After failing to make the Event Final in Rio (as one of the four reigning champions on the event), this has to feel redemptive.

Yeromina began her routine with a big (and consistent!) Nabieva, followed by a Pak to Chow half. Her inbars were solid as was her jaeger, and while she counted some errors on her transition from low to high and in her pirouetting, she managed a very commendable routine. If she can clean up some of her execution, she’ll be even more competitive.

Nina Darwael began with a gorgeous piked stalder tkatchev and equally lovely stalder tkatchev half to Pak. She followed that with a Chow to Bhardwaj (full-twisting Pak) and a Van Leeuwen, ending with a toe-on full to full-twisting double back dismount. Determined to claim every tenth she could, she gave a “Mustafina” salute, covering up a not perfectly stuck landing with a hop to salute the judges. She was going to make that podium!