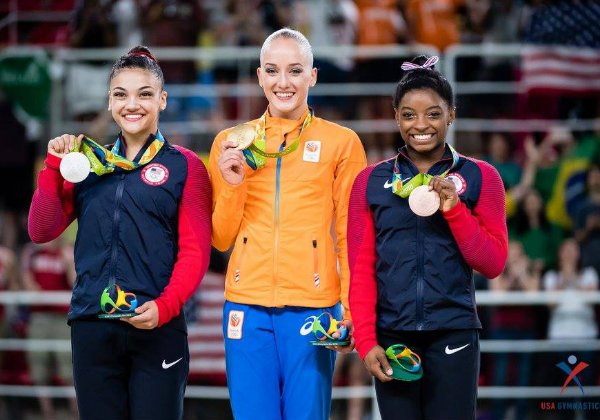 The balance beam field was an extremely competitive one. The maximum difficulty competed at the Rio games varied between 6.2 and 6.7, so none of the eight finalists were outsiders in the fight for an Olympic medal. Eight true beam specialists, decorated with World, Olympic or European medals, were set to compete. Dedicated veterans that have made finals at major competitions for years, but also up and coming beam workers with perfect form. We knew  this final was going to be great.

Fan Yilin started with a strong 14.50, a great table setter for the rest of the field, but much lower than her potential 15.066 achieved during the team finals.  She had a nice enough routine round-off layout to two feet, switch ring leap, sheep leap, walkover, leap to side somi, leap to side aerial, triple full dismount but balance checks after the acrobatic elements kept her execution score in the mid 8s, so not enough.

Canada’s Isabela Onyshko, had qualified last for the final but big acrobatic series were giving her hopes for a medal – if executed well. Unfortunately the nerves were not easy to overcome.  She started with a flic – bhs – layout to two feet and the first check, aerial to side aerial, a big pause before the next combo: flic to back tuck full and an unfortunate fall. She continued with aerial to switch half, ring jump, double tuck dismount and her score was a 13.4 for a 6.1 D.

A very tense Simone Biles was up next. Was it me or she was moving very slowly?  2 1/2 turn in squat very well done, two jumps, Grigoras almost perfect and what a relief as this was the most difficult and also less stable element of her routine, flic connected to two layout stepout elements. And then the punch front tuck. The foot slipped and she had to re-adjust, grabbing the beam. The gold medal was out of question from here on. She continued with her switch leap to switch half combo and an amazing full in dismount – 14.733/6.5 for her.

Sanne Wevers was next. Remember she was capable of a 6.7 difficulty so up there with Simone if all went well. She took a  long pause to focus before setting off for the first element. Mounted with a full twisting back handspring (a real mount!),  then she floated on the beam for the rest of the routine: double L turn, side aerial to side aerial, triple turn, Kochetkova, pirouette combo was great (double L to full turn to double turn to leap), Gainer full dismount almost stuck. Her score was a massive 15.466/6.6. With Simone out of gold contention, Sanne was comfortably at the lead.

While waiting for Sanne’s  score (apparently her difficulty score is quite tricky to calculate, by the looks of it) Catalina Ponor was next to the beam, ready to compete. She looked like she had everything to lose. Which, coming from her 5th qualifying position (not best execution, not highest difficulty), and given her history on this event at 2012 Olympics, was a completely wrong mindset. She needed to be the underdog, she needed to chase perfection and a wobble free routine, she needed to fight for her spot up there. And she fought hard not to lose tenths – there was first the stop after the Onodi. The aerial to flick to layout to two feet didn’t look connected either. She stopped on the switch half to Kochetkova. She fought to pull her legs above her head on the Omelianchik. The double pike dismount had a large step. Her 14.0/5.8 would through her far away from the podium.

Laurie Hernandez: the young and “inexperienced” American that works the beam as if she was born up there.  But as decorated as the US team is, the pressure to deliver every single time can still be overwhelming. Laurie went on to perform one of her characteristically great routines. There were checks: the opening punch front needed an adjustment, as did the flic -loso -loso combo. But the rest was perfection: walkover two leaps, sheep jump, switch leap to switch half. She dismounted with an exquisite double back pike. Her score was a 15.33/6.4, she she was in silver medal position. (team USA sent an inquiry following Laurie’s score, which was rejected)

The 2016 silver European medalist, Marine Boyer of France was up next. Although visibly affected by the importance of this moment (she was also the sole French woman in the event finals) she hit her routine: round-off layout, switch leap to switch half, aerial walkover to two jumps, side aerial with a big check, pirouette combo, leap to side somi and a great double pike dismount. But her score was going to be a “low” 14.6/6.1, not enough for a medal sadly. (team France sent an inquiry following Marine’s score, which was rejected)

Last up, in a dramatic twist of fate, the Brazilian darling Flavia Saraiva. She had hit this routine almost cold for the past months and her regular score in the low 15s would have been enough for a medal. But the pressure was too big: flic to two layout stepouts,  a round-off  to layout to two feet with a big wobble, almost falls. Not all is lost, remember at this point Simone is on 3rd and she touched the beam. But Saraiva needed to be perfect from here on: leap series, switch ring leap to sheep jump (both breathtaking) punch front, switch ring leap , aerial – aerial – side somi big check again. Might run out of time so she rushes though to her double pike dismount. Her score of 14.533 would put her on 5th place.

And here are the final results: