Romania, Will They Make it? 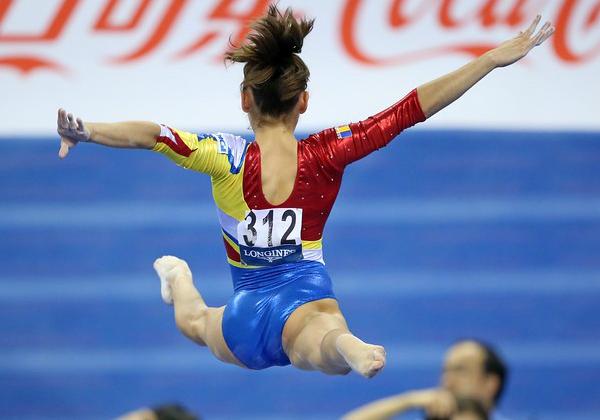 After Larisa Iordache injured herself in training last week, Romania’s task to earn a spot to the Olympics has become much more difficult. To qualify, they will need to finish among the top four teams at the Test Event, mid-April. They will compete for one of the spots against Australia, South Korea, Switzerland, Brazil, Germany, France and Belgium.

On the 16th of March, the provisional team of gymnasts to compete in Rio in April was announced: Cătălina Ponor, Diana Bulimar, Anamaria Ocolişan, Silvia Zarzu, Dora Vulcan, Laura Jurcă; the reserve will be Anda Butuc, while the coaches joining them are Lucian Sandu, Adela Popa, Maria Fumea. This is similar to the list of gymnasts that were set to compete in Glasgow last October. The notable changes are: the swap of Catalina Ponor and Larisa Iordache, the addition of Dora Vulcan, the absence of Andreea Iridon.

**Is Romania competing anywhere before the Test Event? **Unfortunately there will not be many opportunities to see the Romanian team competing: today they had a sort of an open training in Bucharest, before the MAG meet Romania vs Spain. Next week,  Diana Bulimar (bars, floor), Catalina Ponor (beam) and Dora Vulcan (bars, beam, floor) are set to compete at Doha World Cup. On the 3rd of April the team will compete in Belgium, against the host and Germany.

**So, how does Catalina Ponor look? **Cata is still recovering from a calf injury she sustained last September. She had a tough road of recovery and rehabilitation which she took extremely seriously. Unfortunately it hasn’t been long since she has started training again and she will likely have only beam ready. In an interview for TVR she also added that she will compete floor in Brazil, but a routine with only two passes.

And her floor run through:

**Why Dora Vulcan? **Born in 1999, Dora Vulcan has been with the national team since 2013. She has received so far few international assignments (2014 Gymnix, 2014 Massilia) and has competed mostly at a national level. She is a gymnast with long lines, “easy on the eye”. Last time we saw her compete she didn’t have a lot of difficulty, between mid 4’s on on uneven bars and 5.2, 5.3 on floor and beam. On vault she could do a clean full twisting Yurchenko. The highlight of her bars routine was her straddle Jaeger release but only dismounted with a double tuck. Beam was lovely to watch with Valdez-flick-layout stepout, aerial, illusion turn, side somi, sheep jump, double tuck dismount. On floor she didn’t have much difficulty either but rather came across as a talented dancer  – full in , double tuck, double pike 1 1/2.  It is safe to assume that she could have grown a bit in difficulty since 2014 Massilia, when she was competing these routines, but is highly unlikely that she became the trickster in the meantime. Vulcan can be the all arounder the team needs, if she has become consistent on her routines in the meantime, the judges will love her and she could get very good execution scores. [Dora Vulcan interview, via PuzzleGym]

In the absence of Larisa Iordache, with Catalina Ponor competing two events at most, with Silvia Zarzu not a great option for bars either, the 6th gymnast of the team needs to be someone that can compete both bars and have at least an FTY on vault. Unfortunately Andreea Iridon has not been able to train a more competitive vault due to nagging elbow issues that are affecting her mostly on this event. This seems the likely explanation of adding Vulcan in the team over Iridon. But opting for Anda Butuc instead of Andreea Iridon as an alternate does seem a weird choice (if both of them are healthy, which is a big if). The two have similar strengths and weaknesses (no FTY the last time I checked, clean but mid level difficulty on bars and beam, low difficulty on floor), with a plus for Iridon who has much more international experience and a more competitive bars routine.

So, will Romania make it?

The strategy is difficult to read at this point. From the interviews given after the podium training earlier on Wednesday, it sounds that they are not going to count on a lot of difficulty but rather on well executed more basic routines. Considering the level of their competitors (Brazil, Belgium and Germany have competed a bit already this year), Romania needs to take full advantage of their higher vaulting potential (squeeze out all the DTYs they can), only present what they do well on bars, regain their confidence on balance beam and just have enough stamina to pull four decent floor routines without many landing deductions.

Considering the team scores from Glasgow Worlds, it looks like a total of 221 points in a 5 up 4 count competition will guarantee the qualification. But this means an average of  13.875 per routine. There is also the added challenge of competing in the first subdivision at the Test Event. In conclusion, they will need to be as close to perfection as possible.